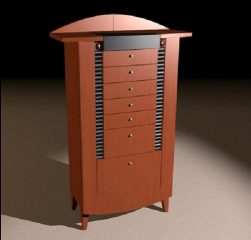 Its fan-like body is prone to breaking, which necessitates a dense wood. I chose hard maple, just because I had a piece laying around. The other van cabinets that I will be building in the next few months, will carry the same decoration, so to hurry things up, I’ll make them all at the same time.

After dimensioning (sawing, jointing & planing) a 6” wide board of hard maple will end up in three strips of wood, each to be divided up later on into two decorative pieces.

With the table saw blade set at 22.5°, consecutive cuts are made. The cuts start at 1¾” from the center and move outwards.

With the blade set at the same angle, cut out every other partition and flatten its bottom with a small chisel.

Now you cut the strip of wood midway, to create two decorative strips

The top square thickness is reduced to accommodate the cherry ‘button’. 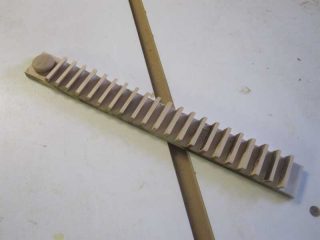 A round cherry ‘button’ is placed on top of it.

The length of each strip will be adjusted later during the project.

Made with a circle jig on the bandsaw and finished with table top sander. A better solution would be using a lathe.

Sign up to receive our newsletter.
We promise not to annoy you, but if you wish, you may unsubscribe at any time.
Go to mobile version