In recent weeks, I evaluated four out of five cargo van candidates for my RV conversion project. I reviewed the 2015 Ford Transit, Ram ProMaster, MB Sprinter and the Nissan NV. I left out the Chevy Express, mainly because it is quite dated and doesn’t fulfill my minimum requirements.

I quickly came to the conclusion, that I needed a lot more volume than the Nissan NV was offering. The Mercedes Benz Sprinter was a bit more complicated. It is certainly the best finished van available, right now, and it has all the features to make it a wonderful van conversion. Yet it has one major drawback: the curvature of the side walls causes the interior width, at shoulder height, to be substantially (approx. 7 inches) narrower than the other vans. Another, more personal, downside to the Sprinter van is that it comes equipped only with diesel engines. While longevity of this type of engine is a big plus, the higher cost of repairs and maintenance, the limited number of Sprinter dealers (repair shops) nationwide and the additional purchase price will keep this cargo van off my preferred list.

That leaves the Transit and ProMaster on my current buying list. There are many smaller differences between these two models, but some of the more noteworthy are as follows:

Every additional foot of length adds another $1,000 to the purchase price, which makes it comparably the same base price. With my current Dodge B-250 having a 116” payload area length, both ProMaster and Transit are substantially longer. 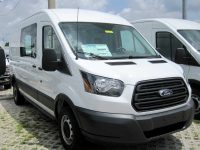 The interior height of the medium roof Transit is a serious point of concern to me; the finished interior height will be less than 70 inches, barely sufficient for the average person to stand upright. Changing it to a high roof will add another $5,000 and make it impossible to park in my deed restricted community.
On the positive side, Ford’s options include factory installed and warranted all-around privacy windows, avoiding any after-market changes to the exterior.
In general, I like the design and finish of the Transit over the ProMaster by far, but still would like to have a last quick look, to check the latter for how much the extended height impacts my usability concerns and to make a final decision on the desired length.

A realistic cost comparison between the Ram ProMaster and the Ford Transit is only possible when based on a set of individual selected options and therefore will vary based on your own choices.

The following list compares two similar models together with my set of options. I highlighted the major differences.

For the roughly $830 extra on the Ford Transit you’ll get a much better appointed vehicle, yet some unresolved issues remain: the low ceiling of the Transit, FWD versus RWD, lower payload floor in the Ram and no need for after-market window installation with the Ford.
Additionally, when ordering from the factory, you have to realize that, incentives are applied at time of delivery and thus may have changed or disappeared entirely by that time.

Sign up to receive our newsletter.
We promise not to annoy you, but if you wish, you may unsubscribe at any time.
Go to mobile version